Ana Pacheco-Navarro held two envelopes in her hands — one pristine and unopened, and the other slightly crumpled and stained with champagne.

The fourth-year medical student from Weill Cornell Medical College had just gotten off the phone with her classmate, Scott Breitinger, who was in the Philippines. Because he couldn't be there, she'd opened his envelope first and then shared the good news — he had just landed a residency in psychiatry at NewYork-Presbyterian/Weill Cornell Medical Center.

Her own envelope remained unopened.

She took a deep breath to steady herself, and then tore open the paper to reveal her match: Massachusetts General Hospital for internal medicine. It was her first choice.

"This is exactly what I wanted and it's fantastic," Pacheco-Navarro said. "It's a wonderful thing to share with my friends, who I'm so happy for, and I think so many of us got our first or second choices." 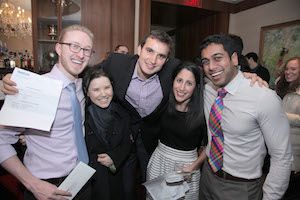 Pacheco-Navarro and Breitinger joined 90 of their fellow Weill Cornell M.D. and M.D.-Ph.D. students who similarly learned where they will be doing their residency training — the next three to seven years of their medical careers — during national Match Day on March 20. This year's match was the largest in history, with more than 18,000 graduating allopathic medical students from across the country and an additional 20,000 graduating international and osteopathic medical students, all competing for some 30,000 residency positions.

Philip Colucci, a 36-year-old former dancer with the Pennsylvania Ballet, will be among those who stay in the area. Colucci, who's from New Jersey, discovered his passion for medicine while being treated as a patient, he says. Now he'll be able to inspire others as a doctor himself, after securing a one-year preliminary residency at nearby Montefiore and a four-year residency in radiology at NewYork-Presbyterian/Weill Cornell.

"I don't think it was a great surprise so much as a big relief to know that everything fell into place," Colucci said. "I feel like there's no better place to be, and I'm excited that I get to stay here for four more years."

Jessica Clemons, who's always dreamed of becoming a doctor, will also stay in New York after being matched to New York University Langone Medical Center for a residency in psychiatry. 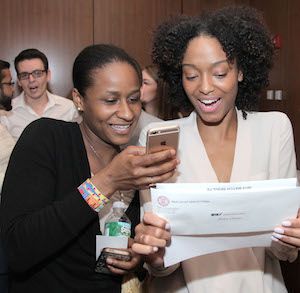 "My heart is racing. I'm excited," she said. "I'm having a hard time containing my smile."

Like Clemons, many graduating medical students have something to be happy about. Match Day is the culmination of a four-year journey and one of the last milestones before graduation day, and according to the National Resident Matching Program, more than half of U.S. seniors matched to their first choice.

The New Jersey native, who will complete his residency in orthopedic surgery, clutched the unopened envelope that carried his match and weaved through the crowd of celebrating students to reach his girlfriend, Juliette Cilia, and his parents, Olga and Dmitri. He unfastened the corner of the envelope with his finger, slid it across from end to end, and slipped out the piece of paper that contained details about his future. He read his match and smiled, and then passed the paper along to Cilia and his parents without saying a word.

"It's amazing," Dvorzhinskiy said. "I really wanted to go there, and I've been working towards this for a long time. It's a dream come true."

He credits Weill Cornell for making it happen.

"The Weill Cornell name was highly respected when I was on my interviews," he said. "It is the perfect medical school."

Read the full article and view the photo slideshow in the Weill Cornell Newsroom.

Map This Location
Jump To Top