Jack Stupinski knows first-hand how challenging it is to eat healthfully while on a budget. When he worked for City Year, an AmeriCorps program, he qualified for food stamps. But despite a meager food budget, he still kept cooking healthy meals for himself, like stir fries and vegetarian meatloaf 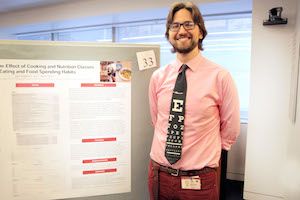 Now a second-year medical student at Weill Cornell Medical College, Stupinski, a 27-year-old from Rhode Island, is paying forward what he learned, teaching his classmates how to feel more comfortable cooking nutritious meals at home. Last summer, Stupinski enrolled 27 students in a six-week, mixed cooking and nutrition instruction class that built upon Chef Ed, a cooking program that integrates nutrition training into the medical school curriculum. His goal: to determine if the program triggered a change in his peers' food habits, and if that change persisted. He presented his findings, which were positive, at Medical Student Research Day on March 6.

"When patients come in who are obese or have high blood pressure, physicians often aren't equipped to tell them how to improve their lifestyle habits," Stupinski said. "There is good data that shows that educating medical students in nutrition will actually produce physicians who are better able to counsel patients."

Stupinski, who found that participants in his class benefited from greater culinary and nutritional knowledge, was not the only one presenting. An annual event at Weill Cornell, Medical Student Research Day provides a forum for students to share their original research with peers, faculty and volunteer judges. Planned largely by first-year medical students Sydney Ariagno, Eric Kutscher, Marta Dzyadyk and Venkat Boddapàti, this 13th annual event featured nearly 40 oral and poster presentations from students who dedicated their semesters, summers and for some, even a year off from school, to conduct their research.

"This event allows the first-year students to see what their predecessors have achieved in research projects, so it can serve as an inspiration and provide contacts," said Dr. Anthony Brown, director of medical student research at Weill Cornell. "It also gives them an idea of the broad spectrum of research opportunities that are available at this medical college." 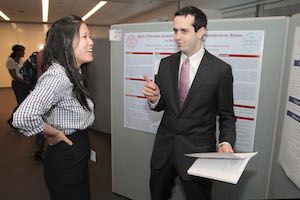 Angela Jia, 29, of Toronto, combined her interest in radiation oncology and bile duct cancer for research she conducted last summer in Beijing. For some patients diagnosed with this cancer — which is more common in East Asia due to a higher risk of hepatitis infection — their tumors cluster around major blood vessels, preventing surgeons from removing portions of the mass, if any at all. As such, patients' median survival rate is three to six months after diagnosis.

Jia's research focused on whether partial surgery combined with radiotherapy would improve long-term outcomes. The second-year medical student found that the combination therapy extended patients' overall survival to 21.8 months. The study, for which she is lead author, will be published in April in the Journal of Gastrointestinal Oncology.

Medical Student Research Day is important, she said, because it provides an opportunity to network and foster future research collaborations — skills that are integral in the modern inter- and cross-disciplinary understanding of medicine.

"It's not like we're back in the ‘50s, where my lab is confined to my lab," she said. "These days, the Belfer Research Building is all open space. You can see what the next lab is doing because it's all about collaboration and networking." 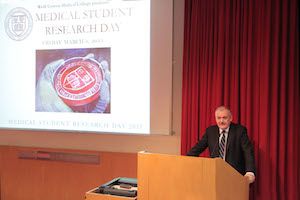 Second-year student Sasha Hernandez, 26, of Florida, spent eight weeks at St. Thomas Hospital in London to conduct outcomes research on screening guidelines for gestational diabetes — a type of insulin resistance that develops in pregnant women. The United Kingdom's National Institute for Health and Care Excellence (NICE) recommends that at-risk women receive one glucose tolerance test — used to diagnose gestational diabetes — early in their pregnancy and another test at 24 to 28 weeks if the first test was negative. In contrast, St. Thomas Hospital recommends a random glucose screening test, which checks blood sugar level, at 26 to 28 weeks. If test results are high, providers perform a glucose tolerance test.

Hernandez found that the institute's guideline was a more accurate predictor of gestational diabetes than the hospital's protocol. Building off these findings, she plans to take a year off from school and return to London next year to analyze the cost effectiveness of St. Thomas Hospital adopting the national parameter.

"I think that we are in a culture and a climate where, for anything to be validated, there has to be statistical significance behind it and there needs to be evidence," Hernandez said. "Our patients don't expect anything less. It's important to get medical students in the habit of finding research angles and pursuing them, so that it's second nature by the time we're practicing medicine."

Read the full article and view the photo slideshow in the Weill Cornell Newsroom.

Map This Location
Jump To Top